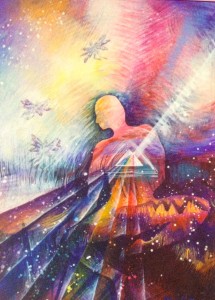 “For your heart to become a flower garden you must search for the beloved.”

“The physical plane is the world of sensation and perception. It is variously called the visible world, the world of waking consciousness, or the world of awareness. This is the room in which existence has reached its culmination and in which pleasure is the deepest and most vivid. My friend, when you’re troubled soul searches for truth in this physical plane, you should first find a solitary quarter, and sit there alone in meditation. Sitting quietly in this place, try to form an image in your mind of a holy saint for whom you have a great regard and respect. Or if you do not have such a saint, try to form the image of someone with whom you are bound by a tie of love. The method of meditation is this. Close your eyes and fix your attention on your heart. With the eyes of the heart observe the image of your master or beloved. The thought forms that you create and witness with the eyes of your heart constitute the world of ideas or the plane of counterparts (alam al mithal). This plane of thought forms lies midway between the physical plane and the next plane (the astral plane). When you meditate in this manner you will find that gradually the thought form will correspond more and more with the original of which it is a picture, and the life of the original will begin to flow into this picture. When you exercise this form of meditation persistently, you will begin to see images that you have never seen before, and nothing will remain hidden from you.” Prince Dara Shikuh translated into English by Chandra Vasu

Commentary: Prince Dara Shiku’s father commissioned the Taj Mahal. Dara Shikuh was a deep mystic and proponent of the unity of religions. In this simple meditation he gives us a way to move beyond our personal egos into the larger field of gnosis. The electric field of the heart is 60 times more powerful than that of the brain, the magnetic field 5000 times more powerful. By dropping from the mind with it’s limited concepts and forms (this is where the default mode network resides, the centers in our brain that form the resonant pattern of our ego structures and personal identity) we move beyond the mind mesh into what is called in Interpersonal Neurobiology a microstate, or more precisely a quantum microstate. Much of the time we perceive reality on a macro level, the Newtonian world of space and time, separate objects and identities. In micro states we begin to experience reality on a quantum level interdependent, entangled, time not moving in a linear form but being able to flow backwards and forwards. In Science and the Akashic Field Laszlo makes the case that everything that has existed or will exist are energetic patterns in the quantum vacuum, compressed fields of information. So from the quantum level, we can reach through space and time and resonate through the image created in our hearts with the field of whatever beloved, mystic or saint we attune to, and then to the larger field of the sea of consciousness that we call the Cosmos. Raphael Farhat Birney

A time to gather and remember that we are awareness, witnessing the many experiences in life through SoulWork practices of song, chanting, elemental attunement (earth, water, fire, air) and sharing. There will be other guests[...]
View Calendar
Add